Have hit 130,000km, so has been about 15,000km on the new battery. Everything is going well. The daily commute is showing about 138km. But this figure is distorted by large hills near home.

This is the first non commute trip that I have taken since the replacement of the battery. I was off to Toowoomba to show my car at a 9 star energy efficient display home ( http://geoffgibsonhomes.com.au ).

I started with a full charge and set off to the St.Lucia DC Fast Charger
When I arrived at St.Lucia, the charger was not working. Due to my previous experience travelling to Gatton, I continued the journey. Tritium fixed it the next working day.

I arrived at Gatton with 28km and plugged into the DC Fast Charger and pressed the start button. While it charged to 90%, I had morning tea. The battery temperature went up one bar while charging.


I arrived in Toowoomba and visited the 9 star display house. It was amazing to see what goes into an energy efficient home. They had all the materials on display and could explain what they did and how that helped.

After the display was completed, I headed back to Gatton. I sailed down the range using regen and got back one bar of battery.
The battery temperature went up another bar after the second charge. I was able to travel the whole way home with 30km left.

I attended the RACQ Motorfest this year with Gary who brought his BMW i3. EV attendance was down in 2017. But the local BMW dealer brought i3 and i8. Also Renault Australia brought the Zoe (tho is still not on sale).

People are more interested in EVs this year than last year, so I think we will see more of them on the roads.

After a 12 week wait, my new battery arrived on 10th June 2017 (installed on the 12th). My LEAF is now just like when it was new. The battery was covered under warranty (many thanks to Moorooka Nissan), but not all the labour. I paid about $1000, Nissan Australia and Moorooka Nissan contributed the rest.

The first reading was exactly like when I bought it, due to the GOM being confused as not enough data.


After a few thousand kilometres, my trip to work is looking good. I use longlife mode (fill to 80%).

Westfield Carindale Shopping Centre has installed new charging stations (in addition to the Tesla destination chargers). These are compatible with J1772 cars. On the bottom floor, creek road entry (Aldi etc.). You will need a charge point card or use the charge point smart phone application. Thanks to Gary Crighton for the pictures. Not sure when it is officially opened, but fingers crossed it is soon. 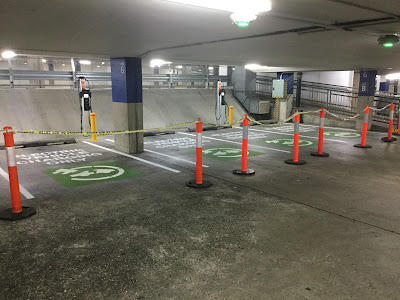 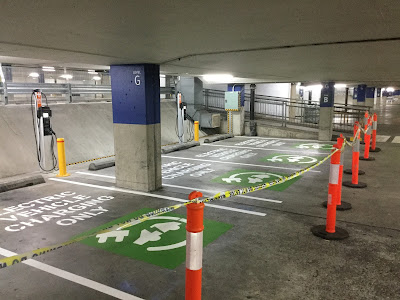 Posted by Unknown at 6:37 PM No comments:

Email ThisBlogThis!Share to TwitterShare to FacebookShare to Pinterest
Labels: Charging

Unfortunately, my LEAF suddenly lost 30km of range (122km on a full charge, down to 90km) and regen was disabled until there was about 4 bars remaining. About September 2016, my 8th bar disappeared. Also, I noticed the energy usage increased, which is probably due to regen not working.

On further inspection, another five modules were found to be lower than the others. So the five and their neighbours (another ten) were removed and run through the machine, which took almost three weeks. The modules were put back into the pack, which was then cycled twice, but they did not raise their level to the others. Nissan replaced the five modules, which took two months to arrive from the U.S.A.

Once the new modules arrived, they were installed and the pack was cycled twice. Unfortunately it did not bring back my range, but it did fix the regen. My LEAF had been at the dealer for six months, so I had the 3G TCU upgrade installed and also replaced the front struts (had rusted).

Nissan ordered me a replacement battery, which will take approximately two months to arrive. So I can drive my LEAF in the mean time. Which is good, because the dealer has very limited space in the service department, and I miss driving electric. I was quite surprised how much I missed my LEAF. The old N16 pulsar still drives nicely, but the engine noise causes the radio to sound distorted, even when I play with the settings. Also the transmission of an I.C.E. car really annoys me, especially at round abouts. Petrol is very expensive and there is always a long line at the service station near me, especially if the price is low. Insert more whinging here. I definitely will never purchase an I.C.E. car again.
Posted by Unknown at 6:23 PM No comments: